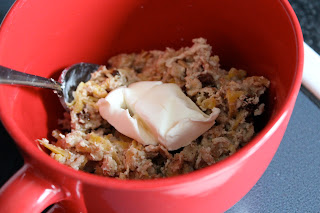 I am in a bit of a writer's block right now. I am running out of things to write about. I love to write and I generally have no problem talking for hours on end, but right now I am finding that I am seriously dry in terms of cool ideas to share. Call it a rut if you will, I don't think I'm quite into rut territory just yet though. You say tomato, I say tomaaahto.

It's really quite crazy. I'm not even at 100 posts. How do you continually come up with things to say? It's just like when you are at a social gathering where you don't know anyone and you end up talking to the girl with the cool glasses and vintage styled t-shirt. The conversation is going to go one of two ways:

Option 1: You start talking to the person that happens to be in your general vicinity, no worries, nice and breezy, find something common and just discuss it until someone else comes along and there is a natural change in the conversation. Or you decide you want more of the bean dip and excuse yourself.

Option 2: You start by asking who the connection is here that brought you both to the same place. And that's about as far as the conversation goes. Awkward. Crickets. And the worst part about this situation is that if you excuse yourself too early it's almost more awkward because you both clearly didn't put in any effort to try to keep the conversation going. So you stay there, awkwardly, until you have hit the compulsory minimum amount of time to linger and then you excuse yourself and blame you leaving on the bean dip.

In this case it isn't a question of coming up with things to say, its more a question about coming up with interesting and engaging things to say.  Or coming up with something you can both discuss, not feel awkward and then when the natural change happens, move on. The worst is that it is a total crap-shoot which way the conversation is going to go. The question then becomes, is it even worth seeing which option you will end up with in this situation? Me personally? I'll live dangerously and take the risk. Party's with food are a must, they allow people to bond over whether they like it or not, and they also provide an excuse for an escape route. Food brings people together and gets people out of uncomfortable situations. What a life saver!

Don't feel guilty, this recipe only makes enough for one person. Although normally I would say that recipes should be made with the intention of sharing, just like my fictional bean dip discussed above, however this recipe just happened to be a single serving (since I was the only one who was going to eat it).  Come on math-lovers, this recipe can easily be doubled or quadrupled! Right?

Let's begin. Just a quick note before starting, I used a yellow heirloom carrot because that was what I had. No, I'm not trying to be fancy. But I kind of like it. 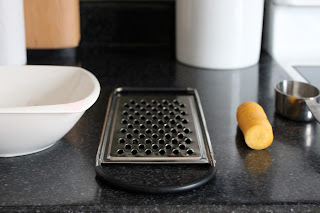 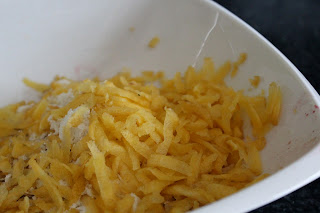 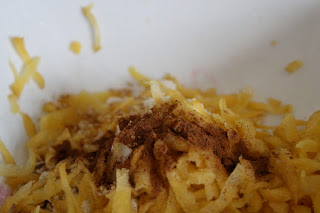 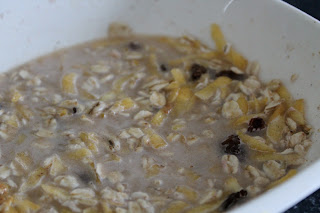 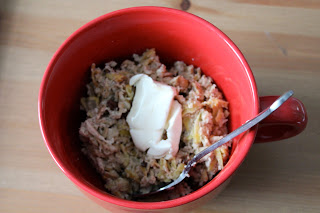 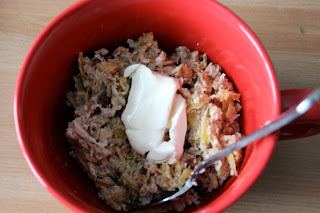 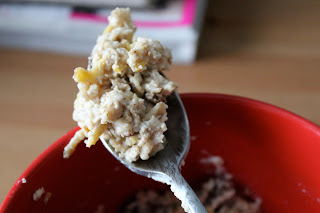 Directions:
In a bowl combine oats, brown sugar, carrot, ginger, cinnamon and raisins. Add the water and stir the mixture. Microwave the oatmeal for 5 minutes (or as per the directions on the oatmeal). Top with cream cheese, maple syrup and cinnamon.
Posted by Unknown at 2:12:00 PM